The Joseph Principle: Flourish During Times of Famine 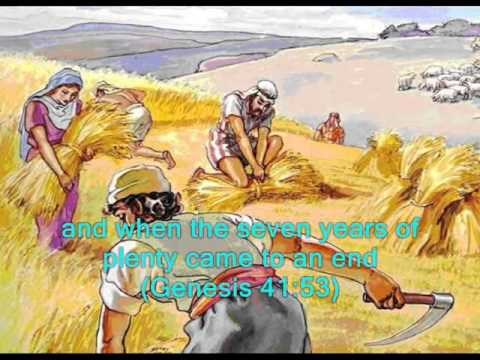 Recently, I’ve been reading through the book of Genesis with my daughter, Hannah. I’ve been trying to read the book through my daughter’s eyes. Since she is eight (and a girl), it’s a bit of stretch for me. Recently, we read about Joseph, the son of Jacob, and learned some valuable lessons. One lesson in particular was the importance of saving. I often call the discipline of saving “The Joseph Principle.” If you don’t know the story of Joseph, I highly recommend you read it beginning in Genesis 37. After a series of bad events, Joseph was ultimately put in charge of Egypt.

The reason Pharaoh placed Joseph in charge of Egypt was because of the wisdom he displayed when Pharaoh needed to have his dreams interpreted. You see, as we see in Genesis 41:17-24, Pharaoh was having some odd dreams:

So Pharaoh told him the dream. "I was standing on the bank of the Nile River," he said. "Suddenly, seven fat, healthy-looking cows came up out of the river and began grazing along its bank. But then seven other cows came up from the river. They were very thin and gaunt-in fact, I've never seen such ugly animals in all the land of Egypt. These thin, ugly cows ate up the seven fat ones that had come out of the river first, but afterward they were still as ugly and gaunt as before! Then I woke up. A little later I had another dream. This time there were seven heads of grain on one stalk, and all seven heads were plump and full. Then out of the same stalk came seven withered heads, shriveled by the east wind. And the withered heads swallowed up the plump ones! I told these dreams to my magicians, but not one of them could tell me what they mean."

Pharaoh asked everyone but God to help him interpret the dreams. No one could help, until Joseph came as an agent for God and was able to interpret Pharaoh’s dreams. Joseph told Pharaoh the seven healthy cows (think angus beef) represented seven years of harvest. The seven gaunt cows (probably the kind of cows they use to make Steakums) represented seven years of famine.


This is a great reminder that economic cycles have been going on for thousands of years and are actually normal. Economies go up and they go down. We’ve seen this here in the United States. In the past 70 years, the US has had 12 recessions averaging about 10 months each. In the past 70 years, there have been 840 months. About 120 of those months were spent in recession. In the other 720 months, the economy grew.

So, Joseph knew Egypt was in the midst of an economic boom (part of the economic cycle). Joseph told Pharaoh that for the next seven years they should save one fifth (20%) of the harvest of Egypt during the seven years of abundance. This way, when the famine came they would have enough food to survive the coming famine. The plan worked to perfection.

I can’t help but think about our own economy and how it parallels this story. We just came out of a time of great abundance and now we’re in a tougher time. Those that stored up provisionally during the boom time aren’t really affected by what’s going on right now. They are barely affected by any economic slowdown. Those that didn’t have the foresight to store up for the coming famine are faring much worse.

So what practical wisdom can we glean from all this?

First, it’s always best to rely on God. Joseph always relied on God. Even during his toughest time, he always depended on God. His faith never wavered. When you think of the “heroes of the faith” we often think of Paul, Moses, Abraham, Mary, and Martha among others. But it’s rare that we think of Joseph. I think this is a mistake. Joseph was a man of incredible faith. He was sold by his brothers into slavery, wrongly accused of a crime he didn’t commit, and forgotten by his friend. However, he never lost his faith. As a result, he was eventually rewarded by Pharaoh. Pharaoh put him in charge of Egypt, gave him his special ring and even put him in robes of fine linen (paraphrased Genesis chapter 41 and 42)

Second, we need to leverage what we have for God and for others. God doesn’t bless us because of our worthiness or for our benefit alone. As a result of Joseph’s obedience to God’s wisdom, Egypt was able to produce enough grain for itself and for its neighboring countries. In his book, the Treasure Principle, Randy Alcorn says “God prospers me not to increase my standard of living, but rather my standard of giving.”


Finally, Biblical wisdom is timeless. Even though Joseph lived about 3,500 years ago, his advice works as well today as it did during his time. This is because his wisdom was given to him by God, the creator of everything. Joseph understood that all good advice comes from God. In the end, we can all learn from Joseph and make it a habit to depend on God and seek his wisdom during both times of prosperity and famine.